Arnie Cottrell has been around for a very long time. He plays acoustic guitars, National Tricone guitar, mandolin, mandola, octave mandolin, bouzouki and he sings. He has opened for Robert Cray (twice), Keb Mo (once), Martin Carthy and Norma Waterson, Dick Gaughan, Tim O'Brien and Arty McGlynn, Arty McGlynn and Nollaig Casey, Jackie Leven, The Levellers (the Great Important People's Chairs Controversy!) and has played at a few festivals and recorded on both sides of the Atlantic but he has only been on TV in Louisiana. He loves music and eggy bread and his favourite colour is Dark Blue . . . He is also leading third of the mighty Velvet Doonicans.

The Velvet Doonicans were formed when the Velvet Underground replaced Lou Reed with Val Doonican in the early 70s. It was a whole new direction for the band and, sadly, soon led to the demise of the band that had come to represent the complete anarchic anti-music antithesis to the summer of love and to middle of the road cartoon Irish folk music.

We picked up the torch and ran in the opposite direction, whatever that means.

The rest, as they say, is history.

What do we play?

Check out the music on ReverbNation and find out. If you like it . . . Great!

Graham Bushell is a truly gifted multi instrumentalist with a lifetime of experience playing in just about every musical situation you could dream up from hard rock, blues, country and western through a top notch swing band (where he was the only member not to have come out of the Royal Marine band school at Deal) to West End shows in the orchestra pit. He has toured relentlessly and his fretboard skills have graced many fine recordings. He plays guitars (including dobro), mandolin (and, indeed any member of the mandolin family), banjo, ukelele, bass guitar all with his own unique style which is all about feel. He is currently one third of Arnie Cottrell's Velvet Doonicans (and all that implies!).

Rick Foot comes from a background in jazz and abstract improvisation, having played with a wide range of musicians - everyone from Evan Parker to Dick Heckstall-Smith - in the UK and Europe over the last 25 years. He was in Jon Boden's (of Bellowhead fame) Remnant Kings, has played and toured and recorded extensively with Australian guitarist songwriter Derrin Nauendorf and plays regularly in a duo with singer Jo Long and with her band The Pure Drop and with Dan O'Farrell's Difference Machine.

He has recorded with Nancy Kerr and James Fagan and has gigged with them frequently including their last album launch at last year's Cambridge Folk Festival. He has gigged extensively with songwriters across the broad sweep of contemporary folk/roots music and he was in the legendary Hungarian Celtic fusion wonder that was Fianna (including one of their two albums - well worth a visit). He has also played with Luke Daniels touring Luke's first album of Luke Daniels songs. He has two genuinely fine and utterly unique solo albums out and he gigs his own material up and down the country. He is brilliant at the Guardian crossword . . . Oh yes, he is another third of the Velvet Doonicans. 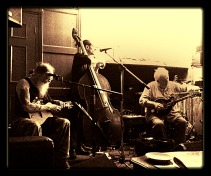